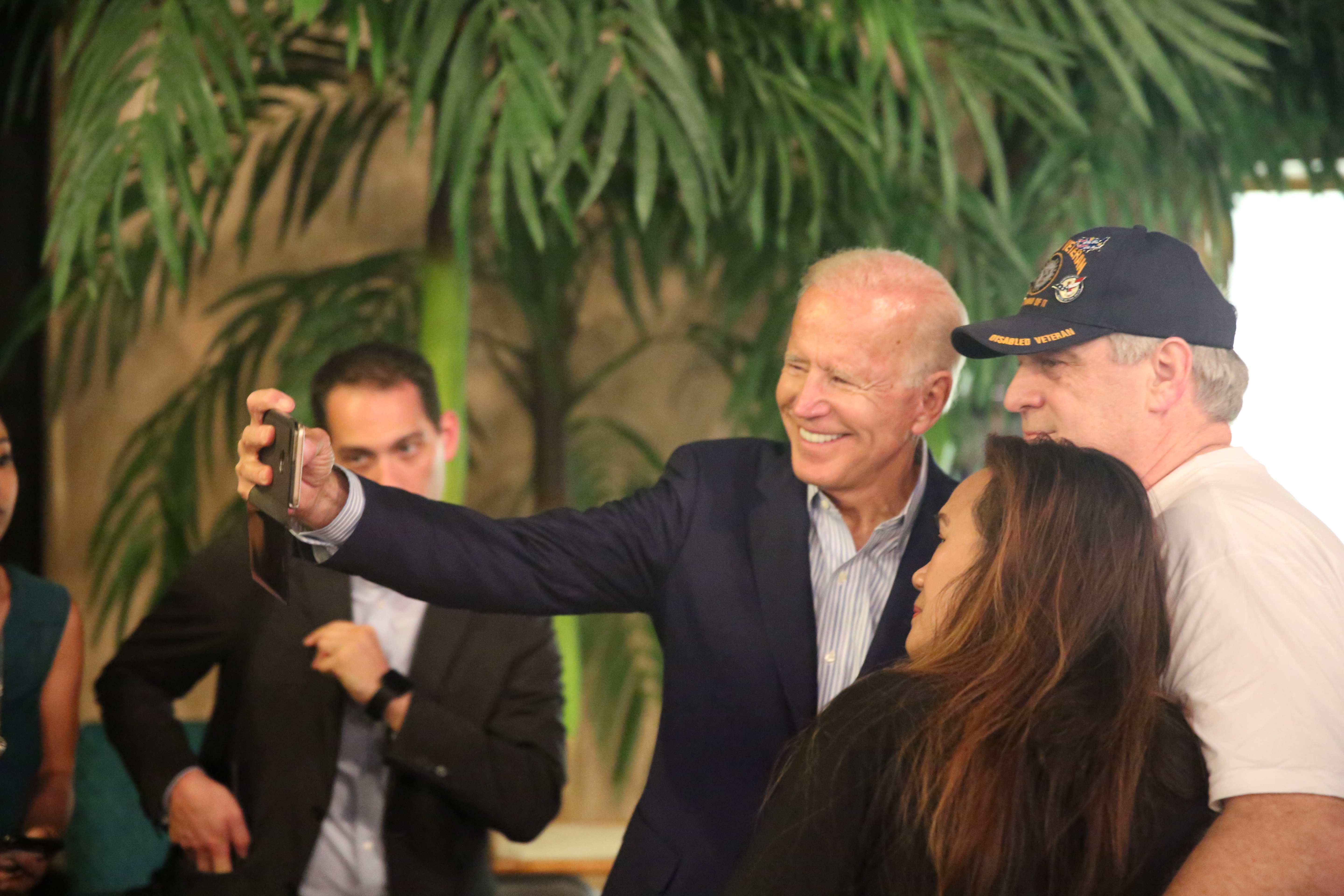 Along the walkway off the dancefloor of the Surf Ballroom in Clear Lake, Iowa men in funny little black hats waved signs that said "QUIET PLEASE." An order that nobody even tried to follow.

You know that feeling? When you're at a football game on a Friday night, and the entire county is dark except the stadium, because everyone for miles is there? Or when your favorite team wins the greatest honor they are able to win. Or when you walk through Times Square for the first time, and all the approaching pedestrians seems like salmon leaping upstream.

For reference, I was in Spain in 2010, when the Spanish men's soccer won the World Cup for the first time in the country's history. I have gotten caught on streets in Germany and Spain during riots. I have been to lots of concerts.

Yet I was puzzled by the energy inside the Surf Ballroom that Saturday night in early August, for the Iowa Democratic Wing Ding.

The way people's faces grimaced or fists clenched or eyes bulged, and how they skipped around the outside of the dance floor like you would at a decent skating rink, and it was the first time in the campaign that I thought, "Now what in the hell is this about?"

The ballroom had the muffled feel of an old comedy club, the kind of setting built for music and dancing as practiced in the 1940s, or earlier. So everything, every sound, felt close. And warm, like a worn LP album through some giant old speakers. So far, it was the closest a Democratic rally had felt electric.

Chaos. Wild. Wild! The place erupted as Elizabeth Warren strutted offstage. At the bottom of the stairs, Joe Biden shifted from foot to foot, surrounded by a small entourage, all wearing "Biden 2020" t-shirts.

Nearly as wild and transfixing as a Trump rally. Which is maybe why everyone was so fired up. Like they were practicing a mean face in the mirror before they use it in a fight.

For this very reason, it felt more like a high school dance than a major rally featuring 20 of the 2020 Democratic Presidential candidates, all in one place for the first time in who knows how long, as they vied for their chance to rule the world. Traditionally, that dream is ended in Iowa, by forfeit or defeat or preemptive removal.

Nonetheless, these were some powerful people. And one will become the Democratic candidate for President, then possibly President, for 2020-2024 — at least. Or the next one.

Any one of them could become President down the line. Or any number of indispensable positions. Five years is a long time in America, and nobody knows what's next.

But, for these candidates, future elections did not currently matter. What mattered were the media and the public. The locals.

Iowa is traditionally the Everyman State. Come to them with a solution that they can believe in, and they'll side with you.

Do they care about the middle parts of this country, all that land between the Oceans? How do they shape up as a person, as a potential boss? If they get the job, will they care about rural America? Can they shake a hand? Can they look you in the eyes? Can they leave the room and you feel their absence? How are the media reacting to them? Do they have a condescending tone? Are they putting on an act?

In Iowa, the candidates bring their answers directly to the voter, like door-to-door salespeople or traveling magicians.

In 2015, then-candidate Trump flew above the State Fair in a private helicopter, circling the stage as Democrat frontrunner Hillary Clinton gave her speech at the Political Soapbox. A lot of Iowans liked that. Many still do.

A political Willy Wonka, Trump offered rides in his helicopter, which landed at a nearby baseball field, to randomly selected handfuls of Iowa children. 'Come here,' he said to the kids. 'Does anyone want to take a ride? It's nice, right? . . . Who wants to go first?'Trump, they reported, "was out of his element here but undoubtedly in command."

Most of the audience had their candidate t-shirts on. There were candidate badges, too. And lawn signs. Banners. Bumper stickers.

A Springsteen song blasted through the speakers, a little too loud, almost clipping. The song riled Biden.

In his navy-blue suit he gripped the podium from each side. An American flag tassel hung limply over the top. Biden's eyes prowled for each person. A dual-frame mic stand held up two microphones. As backdrop, an American flag stretched two stories high and ran the length of the stage, nearly as big as the one at the Presidential Gun Sense forum.

Muscled and tattooed, men in bright yellow shirts that said "SECURITY" stood watch behind metal barriers. Can-lights shone down on the stage at various angles, held up by metal braces and elaborate rigging, a giant shining skeleton. At each side of the stage were six pole-mounted speakers in trapezoidal plywood cabinets.

The walls were a dark blue, like ocean at night, accented by the white pillars that divided the dancefloor from the walkways and the bars and the restrooms and the museum with so many signed guitars.

Rows of booths flanked the back, on this occasion occupied by journalists, huddles of them, turning each booth into a copse of wire and plugs and paper and computers. In front of them, a pathway to the bar that was always busy, all of it was, everywhere, then a line of cameras divided by a green railing. And men in funny little hats expected people to listen?

New installments come Mondays and Thursdays. Check out my Twitter. Email me at kryan@blazemedia.com

Known for his quick wit, candid opinions and engaging personality, Glenn Beck has attracted millions of viewers and listeners throughout the United States with The Glenn Beck Program. His radio show is now heard on over 400 stations and is... Read more